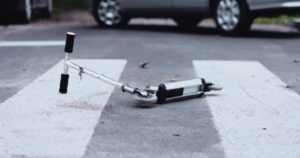 An electric scooter rental business is racking up injury lawsuits in Brooklyn. Revel, the scooter company that owns 1,000 scooters on the streets of Brooklyn is currently facing several lawsuits. According to an article in the New York Post, the scooters can be given to anyone who can afford to pay $5.00, has a valid driver’s license, and downloads the app. Under NY State law, scooters can be used without a motorcycle license as long as the vehicle cannot reach speeds above 30 mph. A Revel spokesperson said it offers customers free in-person lessons, seven days a week. Revel scooter service has only accelerated the chaos on the streets of Brooklyn, endangering passengers and other travelers with poor training and faulty parts, says a string of claims.

This level of facility turned traffic in the outside neighborhood into a high-risk test drive, according to lawyer Daniel Flanzig, who represents two people who are suing Revel for injury before the Brooklyn Supreme Court. Flanzig’s clients include Paul Dicesare, a cyclist who claims to have suffered an ankle fracture in a June collision with a Revel driver near York and Gold streets in downtown Brooklyn, according to the documents presented. Revel “was indirectly responsible for the reckless and negligent acts of his driver,” argues the lawsuit, which claims unspecified damages. In another lawsuit, brought through by another lawyer, claims that a Revel scooter locked him up in the middle of a trip, causing an accident that left him with two broken legs.

In a statement, Revel said the company did not comment on the ongoing lawsuits but insisted it is important that novice users learn at ease before hitting the city streets. For the moment, it seems like the revel industry might have more problems fighting off the lawsuits leveled against them, than marketing their scooters to the public.

Do NOT follow this link or you will be banned from the site!